With our research on island biogeography we study the spatial patterns in the distribution, richness and dispersion of terrestrial species on islands. We especially investigate small islands (<3000 km2) because they are isolated study systems with relative simple ecosystems and a known geological history. We implement island biogeographic theory in the analysis of nature reserves which are often like islands surrounded by agricultural or urban oceans. We are particularly interested in how the geodiversity of reserves and the connectivity through ecological structures promote biodiversity and the functioning multitrophic communities and ecosystems.

The 600.000 year old volcanic island of São Jorge (Azores) formed on top of a transform fault being part of the mid-Atlantic Ridge (photo by K.F. Rijsdijk).

We quantify the spatiotemporal dynamics of island environments at different temporal scales: deep evolutionary time scales (10-0.1 Ma) as the result of endogenic processes; intermediate ecological time scales (100-10 ka) as a result of climatic and sea level changes; and human time scales (10-0.1 ka) as a result of human influences on insular ecosystems. We use historical, geological and geophysical reconstructions to model and quantify insular environmental change. We quantify how these changes affect the connectivity and isolation of islands and continents. We also inventorize geodiversity metrics of island systems and assess how they affect biodiversity and spatial patterns of biomass. 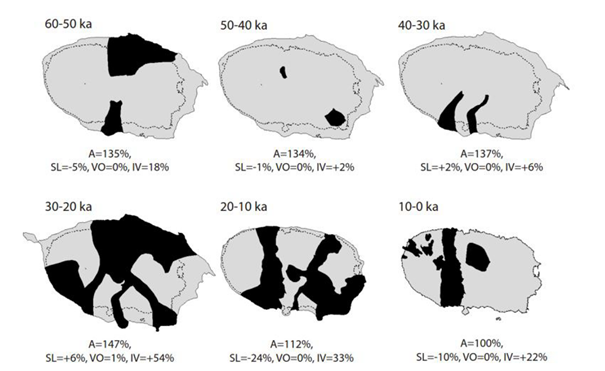 Figure: A reconstruction of how coastline positions have changed over a period of 60.000 years on the Azorian island of Terceira. The present-day coastline is shown as dotted line. Legend: 60 ka = 60.000 years before present, A = surface area relative to present, SL = contribution to area change by sea level, VO = contribution to area change by volcanic activity (lava deltas), and IV = intravolcanic change within the island caused by lava flows (Rijsdijk et al. 2020, Frontiers of Biogeography).

Currently, we mainly study how sea-level change has affected endemic species richness patterns in (sub)tropical volcanic islands globally and of continental islands in the Mediterranean. We also have a special focus on the continental Aegean Sea islands and the oceanic islands of the Mascarenes. In the Netherlands, we study the Oostvaardersplassen Nature Reserve.